The Army National Guard of the United States

On December 13, 1636, the first militia regiments in North America were organized in Massachusetts. Based upon an order of the Massachusetts Bay Colony's General Court, the colony's militia was organized into three permanent regiments to better defend the colony. Today, the descendants of these first regiments the181st Infantry , the 182nd Infantry , the 101st Field Artillery , and the 101st Engineer Battalion of the Massachusetts Army National Guard – share the distinction of being the oldest units in the U.S. military. This marks the beginning of the organized militia, and the birth of the National Guard's oldest organized units is symbolic of the founding of all the state, territory, and District of Columbia militias that collectively make up today's National Guard. The first use of the term "National Guard" by American militia units dates from Lafayette's 1824–1825 tour of the United States. The 2nd Battalion of the 11th New York Artillery – which later became New York's famed 7th Regiment – was one the units that welcomed Lafayette to New York City, and it adopted the title "National Guard" in honor of Lafayette's service as commander of the Garde Nationale de Paris during the French Revolution. During a review of militia units Lafayette took note of the term, and as it grew in popularity it was adopted by many militia units in the years that followed.

The history of the Michigan National Guard is one of long and honorable service that predates the state itself. As one of Michigan's first settlements, Detroit is looked upon as the birthplace of the early Michigan Militia. The first indication of an effort to organize a militia is the reference in the Cadillac Papers of a proposal made by Sr. de LaMothe. His proposal, dated November 13, 1708, called for forming four companies to act as a militia for the colony. The first Regiment of Michigan Militia, the Detroit City Guards, and a company of mounted volunteers (dragoons) made up the earliest Michigan units and were barracked in Detroit. To this day, the Michigan Army National Guard Armory on 8 Mile Road in Detroit is called the “Light Guard” armory in honor of its history.

On June 30, 1805, the act organizing the Territory of Michigan took effect, with General William Hull as the first Governor.

The Michigan Militia, then later, the Michigan National Guard, has participated in every major US and state campaigns. Some of the more notable are:

32nd "Red Arrow" Infantry Division in WWII Michigan and Wisconsin National Guard Soldiers were the first U.S. troops to see combat during World War II. Units of the 32nd hold the record for most days in continuous contact with the enemy during the war.

1279th Combat Engineers Michigan's only all African American unit set a record during the Korean War that still stands today.

Loyalty- Bear true faith and allegiance to the U.S. Constitution, the Army, your unit, and other Soldiers

Respect- Treat people as they should be treated

Selfless Service- Put the welfare of the nation, the Army and your subordinates before your own

Honor- Live up to all the Army Values

I will always place the mission first.

I will never accept defeat.

I will never quit.

I will never leave a fallen comrade.

I am an American Soldier. I am a warrior and a member of a team.

I am disciplined, physically and mentally tough, trained and proficient in my warrior tasks and drills. I always maintain my arms, my equipment, and myself. I am an expert and I am a professional. I stand ready to deploy, engage, and destroy, the enemies of the United States of America in close combat.

I am a guardian of freedom and the American way of life. I am an American Soldier. 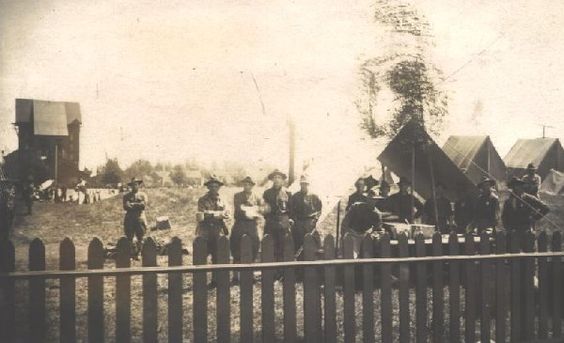 Michigan National Guard Soldiers camped out in Calumet during the 1913 Copper Miner Strike.

The Dual Mission of the National Guard: Serving the State and the Nation

The National Guard is unique in the fact we are the only branch of the U.S. Military that has a dual mission: Serve as a reserve component of the Army, and serve the state to respond during state of emergencies as declared by the governor.

Unlike the Army reserve, where there is one component with the President as the Commander in Chief, there are actually 54 National Guards within the U.S.: One for each state and 4 territories (District of Columbia, Guam, Puerto Rico, and the U.S.Virgin Islands). The Michigan Army National Guard is indigenous to the state of Michigan and our Commander in Chief is the Governor of the State of Michigan. The governor activates the Michigan Army National Guard in order to protect the lives and property of Michigan citizens during state emergencies such as winter storms, tornados, or civil disturbances.

The President of the United States can request the individual state’s National Guard in times of national emergencies. In fact, several Michigan National Guard Soldiers were deployed to New Orleans, LA in order to help victims of hurricane Katrina.

Notwithstanding our mission to Michigan, we act as an important role in our Nation’s defense. In fact, the National Guard as a whole contains over 50% of the U.S. Army’s combat power. The National Guard has been deployed to every major conflict in U.S. history. Michigan National Guard Soldiers have deployed and continue to proudly serve our country as defenders of liberty.